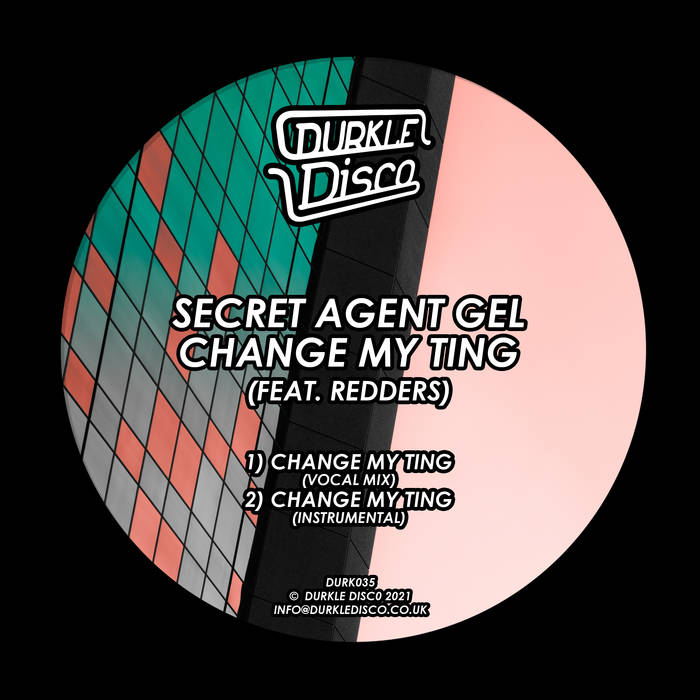 With the days getting longer, and a return to live events slowly coming into focus, Secret Agent Gel & Redders team up on ‘Change My Ting’ for Bristol’s Durkle Disco imprint – a perfect soundtrack to summer good times. Adding a current twist on a classic vibe, this UK Funky banger aims straight for the dancefloor as producer Secret Agent Gel melds vintage tribal percussion with a seriously catchy bassline driving the tune forward. Redders steps up on vocal duties, showing off the full range of his abilities as he motors through R&B style melodies, straight up bars, and gravel-throated dancehall DJ stylings – all within 48 bars! Think Donaeo filtered through an 80s dancehall lens and you start to get the picture.

As the very first voice heard on the very first Durkle Disco single back in 2011 (Eddie K’s remix of Central Spillz’s ‘I Wish’), it’s fair to say Redders has been part of the family since day one, and it’s always a pleasure to welcome him back. Whilst he’s become best known for his DnB output, which has seen him closely associated with Critical Music, and featuring on releases by scene luminaries such as Kings of the Rollers, Sam Binga, Hyroglifics & Particle, he’s also no stranger when it comes to slower BPMs, as the recent ‘Curry GOAT EP’ alongside Sam Binga & previous Durkle release ‘BTTF’ with Boa Kusasa attest. A unique, charismatic and compelling presence on the mic, channelling various overlapping streams of UK MCing, ‘Change My Ting’ sees Redders at the peak of his powers.

On production duties we’re pleased to welcome Secret Agent Gel to Durkle Disco – whilst he may be a newcomer to the label, the East Coast USA-based producer boasts a long pedigree when it comes to pushing UK-influenced bass music stateside as a producer, DJ and promoter since the late 1990s. After making the evolution from 2-step UKG into dubstep in the early 00s, sharing bills with the likes of Kode9, Loefah, Joe Nice & Drop The Lime, and releasing on seminal NYC dubstep label Dub War, recent years have seen an increasing interest in the cross-pollination of music from London, Africa & the Caribbean result in his current UK Funky production style, which have been garnering solid support across the scene and seen previous releases with the Sun Tribe Terrace imprint.

Whilst Durkle Disco have never been an easily-pigeonholed label, ‘Change My Ting’ does fit seamlessly into their lineage of MC-led unapologetically banging UK Funky releases, with previous examples including the links up between SPD & Griz-O on ‘Night Steppa’, Lucent & Buggsy on ‘Originate’, Denham Audio & Juma on ‘Ego Check’, and of course Kouslin & Logan on 2018’s ‘Bad’. It’s a tried & tested formula for Durkle, and one which has been executed to the highest possible standard here by Secret Agent Gel and Redders. An essential for your digital crates as we enter the summer months.

Durkle Disco is a Bristol-based label with bass at its very core. First conceived as a place where grime, garage, hip-hop and dubstep could combine and entwine - with just as much attention paid to the MCs as the producers - the label has since evolved to become a natural home for the new strains of instrumental bass-driven music coming from Bristol’s next unstoppable wave of production talent. ... more

Bandcamp Daily  your guide to the world of Bandcamp

Featured sounds from Fly Lo and Ahmed Idris, plus Mother Nature hops on to drop off new project